Location: Boyaca, Colombia
The Colombian Ruana is not just a woolly poncho nor Europe's Celtic Ruana! The Ruana is a Colombian cultural icon just as the Sombrero Vueltiao is, from the country's hot lands. People from the cold lands like me get gifted our first Ruana when we are just toddlers, sometimes this version comes with a hood. It is one of the most common presents from a relative, specially grandparents who are always concerned about the little ones getting a cold. It keeps you warm and cosy on a cold rainy day. But Ruanas have more than one use! You could use it as a blanket, if you don't mind the slit in the middle that's there to poke your head through. As well as a piece of modern organic clothing accessory showing unique colours. As picnic blanket or folded to be a cushion. Their use even extends to local festivals where young bulls are teased with the Ruana in place of the Bullfighter's cape (the calf’s live is speared in these events). Or even as a more handy survival element, wrapping it around ones arm using it as a shell in a machete fight!

All started when the Spanish arrived to the current Cundi-Boyacence region in the sixteenth century, they observed that the natives, Chibchas, wore a dress adapted to the low temperatures in the region, which also reflected their social status and gender differentiation. Women wore a long, square blanket, called Chircate! Which reached to the ankles and men were covered against the cold weather with a short wool poncho to their knees. In the Chibcha language Ruana means “Land of Blankets”, in reference to the woollen fabrics. The Spanish conquistadors used a Capote (a kind of cape) against the cold weather. The Spanish garment eventually united with the Chibcha's native dress, forming the current Ruana and became part of the region's costume. Together with drill trousers, cotton shirt, cloth and sisal soles sandals (called Alpargatas) as well as a Tapia Pisada hat. Over the years, the Ruana was a unique coat worn by natives and peasants but eventually prevailed in all social classes, to become one of the warmest Colombian icons. 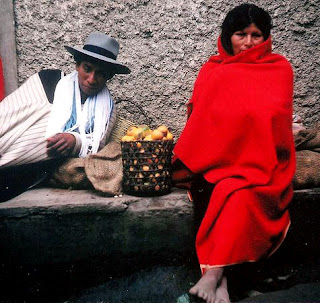 The typical Ruana Cundi-Boyacence is a traditional craft product made of 100% virgin wool and woven on a loom. It is a high-quality material and durable. With a very smooth characteristic texture. These products are manufactured by traditional indigenous families from Nobsa, which is a small town located about four hours North East of the country's central capital, Bogota. The best craftsman from Nobsa could made about five Ruanas daily! The whole process is entirely manual without neglecting the quality of the final product at all. Just as it has been for hundreds of years. The final product at adult size, can weigh about 5 pounds (2.5 kg) and measures 1.5m x 1.4m. This marvellous craft work has conquered national and international markets across the globe such as; Italy, Spain and the United States. So get a Colombian Ruana for your next winter.

Below is a very interesting documentary on the rauna by the a Colombian broadcaster called Señal Colombia.