I often think about my first accounts of Colombia (normally during the regular transatlantic flights). My memories pan back to my first of many trips to this vast and wonderful land. The people I met and the places I visited. All wonderful in their own right. At that point, I have to snap out of it. I have to be truthful and really quite honest with myself. Each time my mind jumps from Michael Palin to Timothy Ross in Colombia in this one episode that brings it to me vividly. This one BBC episode of Michael Palin's Full Circle (DVD/VHS/Book/Kindle). It depicted the most memorable scenes from the whole series, and for me at least came to be the most influential imagery on travel and perhaps even the world. These truly are my first encounters of Colombia. This is where it all began. 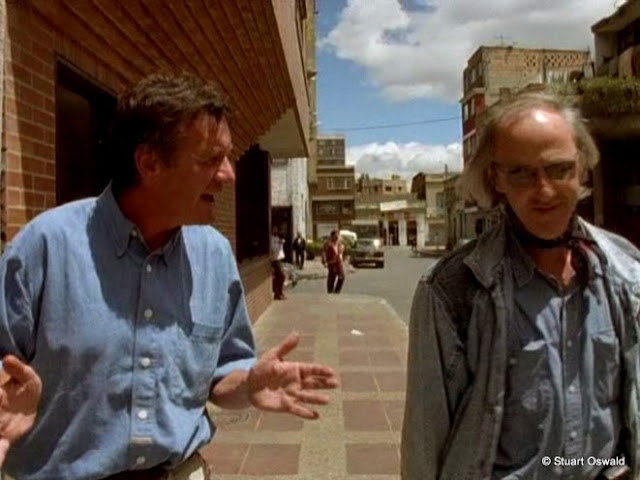 Bogotá, Colombia, is as Palin put it, "trading one jungle for another." With a guide, he discovers why the Colombian capital is one of the most dangerous places on earth. He learns that most of the trouble stems from the drug trafficking in the country. He then travels down Bullet Street, arguably the most violent street in the city. Here, rocks are thrown at the car Palin and his guide (Timothy Ross) are travelling in. He then offers to take him to lunch; however, Timothy declines, stating that the restaurant he is going to is owned by the father of a notorious drug trafficker. Palin, however, continues and is granted an interview with the restaurant owner, Don Fabio. Continuing north, he visits an emerald mine and some of the workers there. Then, it is on to Cartagena, where he hops on a party bus, celebrating the end of his nine weeks on the South American continent.

His then guide Timothy Ross (another facebook page), now works for a charity called Renacer (Rebirth) which is committed to rehabilitating Bogota's 7,500 child prostitutes, most of whom have run away from violent, abusive parents. It is a hard struggle. The Telegraph wrote a piece on it here. Timothy Ross now lives on the exact same street as me in Bogotá, the Calle 22. Although we've never met, I hope to shake his if I do.

It was a great pleasure to meet Michael Palin in person during his talk at the Kings Place Travel Festival this Year. He gave a great account of his travels in East India (photo), it was superb and came over just like an exclusive episode of his travel series. After the event, I had a chance to speak in person with Palin himself. What had been even more wonderful, was his additional account and memories of that eye-opening trip to Colombia in an era past gone.