Paz! What Peace? In Injustice?!

Location: Colombia
I wrote an opinion piece titled; Colombia’s Second War of Independence back in June 2010, about the war here in Colombia. This was during the climate of an election campaign. The campaign was between Santos, the then defence minister (now president) and Antanas Mockus. I backed Santos like many of the majority of Colombians, with the aim of winning this war and bringing those accountable to justice. How wrong I eventually turned out to be. I am confident however that the situation would not be far from what it is now had Mockus won. It's worth pointing out that in my aforementioned piece, I am keen to stress the issue of injustice.


Santos prevailed through the elections to become president. This came due to the electorate voting for Santos as Álvaro Uribe's chosen successor. It's not surprising that the Colombia people went with Uribe's recommendation. Álvaro Uribe turned the tide on the war, backed by Plan Colombia (The number one reason Colombia moved to world two producers of cocaine.), bringing about the greatest improvement to the lives all Colombians. Considering the state of affairs that brought Uribe into power in the first place, it's no surprise. Thanks to these improvements the people were able to travel their own country in safety. Roads become more secure. This wasn't just so that people could go on fancy weekend trips. It brought about critical investment which ultimately turned the war not just upon the FARC but all Narco-trafficking organisations. Sadly thanks to Santos and indeed the FARC, Colombia is again the world's leading Cocaine producing country.

At first, Santos seemed tough and delivered what the Colombians demanded. This being Colombian's most prestigious battle accomplishment that brought about public celebration. Being able to strike back at a foe that made a living of being a nemesis to Colombian's right to peaceful normality. The video below shows a news report on the killing of Víctor Julio Suárez Rojas (AKA Mono Jojoy) in the jungle. Attacks like this, time and time again show for a long time that the FARC were losing and they were losing badly. It's obvious it was time to call the FARC to the negotiating table. Negotiations were so badly required the FARC were begging for it.

Santos from the start of his presidency had the intention of making a peace deal, any peace deal at that, the one issue of his presidency. After a lot of symbolic fuss and upset on the part of where and how the negotiations should take place. The FARC were happy to get their way and have a nice break from the jungle and go on holiday with the comrades in Cuba. Further to this. The negations took place in a near media blackout. For whatever reason this blackout and lack of information. The effect was that Colombians hadn't a clue what their government was negotiating away on their behalf. This really helped Santos (and eventually the FARC even more). A deal could be sprung on the people leaving them only moments to decide their backing to this hastily revealed Santos' deal. All this debate of the peace deal was to be undertaken under heavy media and political manipulation and bombardment. A shock and awe bombardment from as many angles as Santos and Co. could muster. Involving, massive emotional blackmail. Somehow if you do not agree with Santos' political career peace deal you are as good as a murderer yourself! It's as if the people themselves are now being terrorised again, but this time by their own government on all frequencies. Talking of frequencies. The advertising campaign alone has been astronomical. Watching television at any given time of the day you are bombarded with two, three or even more threatening commercials compelling you to vote "Si" or else. Town politicians have taken it upon themselves to manipulate public assets to further their political campaign (see tweet below). The whole is reflective of Britain's own freedom vote and the hate and fear campaign that British public was subjected to in the run-up to their recent referendum. The same tactic is being thrust upon a less suspecting Colombian public now.


Elected local politician takes it upon themselves to drape a one sided political banner across a public highway. Illegal electoral campaign? pic.twitter.com/KWPkZ9zzXT
— Stuart Oswald (@StuartOswald) October 2, 2016

These tactics are not exclusive to the political and media class here in Colombia. Foreigners who know next to nothing about Colombia are getting on board with the pressure. International politicians always keen to help one another out are lining up to pat Santos on the back before jetting off to leave the people searching for justice in the mud while Santos, and majority of well-off kids, some of whom just want to impress their international pals, attempt to talk down to common folk. Support for Santos' peace deal is the lowest in rural areas and the highest in urban areas. It's worth making clear that Colombian urbanites are already living in peace, a peace notably hard won by Uribe (and military), their now adversary. It's as if these new foreigners/expats/conquistadors are pulling the same trick tried on indigenous Colombians a good few hundred years ago. The trick of impressing the simple-minded Colombians with mirrors and now promises of being cool in an increasingly decadent international (majority Western) community. Below is another such rant by a fairly good contact of mine. It does open your eyes and helps to see that even so-called independent media outlets here are still somewhat biased in their views. This, in turn, affects their reporting and skews the information flow to the people. The rank of this media circle feels that they can, through a tirade of unfounded abuse towards people of a mere different opinion. It's as if the anger from the UK's Brexit vote has spilled over to affect this referendum here too. How dare the people to stand up and demand the right to justice and democracy in the face of the self-proclaimed "intellectuals" attempting to run the show from their repetitive safety (thanks again to Uribe).

For anyone on either side, it is clear that the situation here has become unacceptable and this is by no means an environment to hold such an important decision on one peace deal. Why is this being sold as peace when it will obviously not be - criminal forces will only take over the fight? For all the Years this has carried on, the FARC were allowed to reject peace deals, why can't the good people of Colombia reject what is obviously as bad deal for them and their rights? If paramilitary leaders can do time, why can't FARC brass too? Why do murders and rapists, criminals of the most repulsive kind get blanket impunity when Colombia's own two times democratically elected president has to go to court? Why do the real workers of Colombia have to toil to pay for Santo's deal with the FARC, while the FARC preserve their huge stash of funds to indoctrinate weak minds for generations to come? How on earth would Colombia have even achieved Independence, to begin with if it had the mindset from its leaders today? This brings back to my original 2010 post and the answer is that Colombia is on the brink of losing their hard-fought second war of independence. Astonishingly, the current day Battle of Boyacá had already been won long before Santos thought about his personal presidential legacy. Santos wasn't even there himself with a sword in hand. It was left to others to spill their blood so he could sell their justices away for a mere personal token. 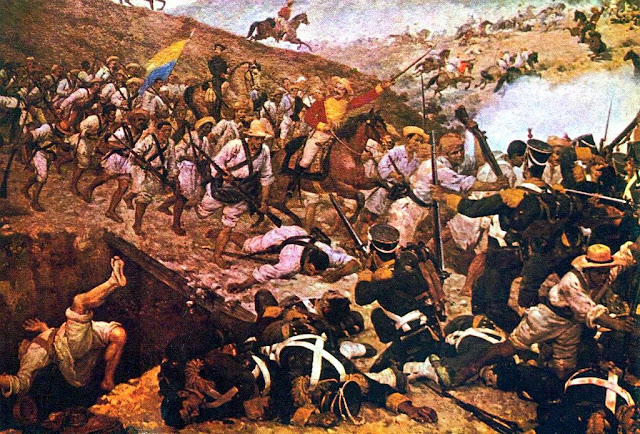 Santos has just subjected his people to Serfdom yet again. Failed left-wing ideologies such as Socialism, National Socialism, Marxism and Communism will now be free to infect innocent Colombian minds. These ideologies and their propagators should have been brought to justice and made to pay for their crimes, just as socialism was brought to book after National Socialism's defeat in Germany with the end of the Second World War. Nothing short of Nuremberg style Trails (Nürnberger Prozesse) with Nuremberg style justice, will bring true and lasting peace just as it has to Europe and one that so badly needed on this continent and in this country. 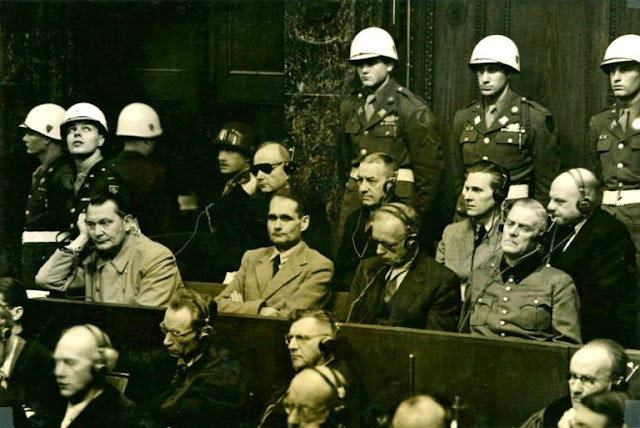