Visiting the Laguna de Guatavita the Legend of Eldorado

Location: Lake Guatavita, Sesquilé, Cundinamarca, Colombia
First of all. The photos that you will have seen on of the Laguna de Guatavita on the internet do not do it justice at all. I thought it looked a bit small and mundane beforehand. In actual fact, seeing this place with your own eyes is almost breathtaking. The sheer scale, depth and view over it with the added historical aspect and importance to the old Muisca people really make this one of the most enchanting places you can visit in Colombia. 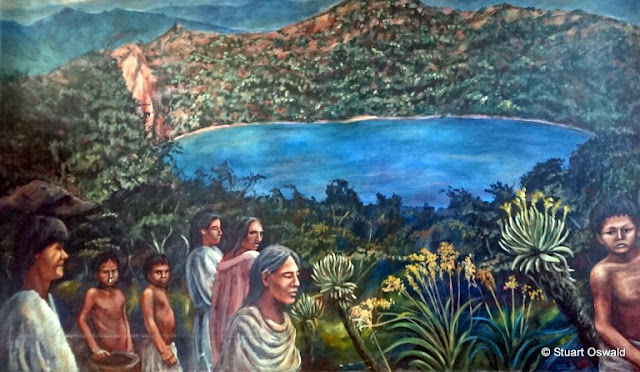 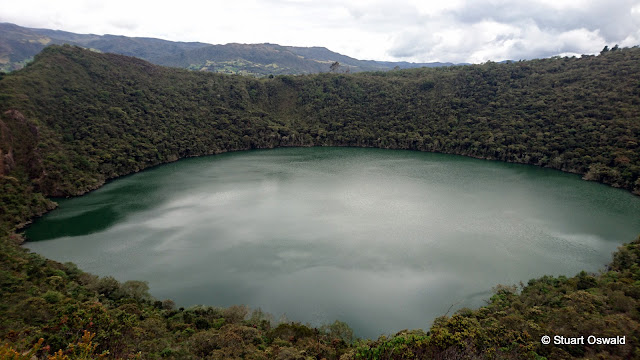 The actual location of the Laguna was sought for a long while by the Spanish on discovering this part of America. They were spurred on but the legends of Eldorado. The raft that you may have seen at Colombia's Gold Museum in Bogotá is one of the depictions of the ritual conducted at the lake and signifies what was intrinsic to the people's mythical interactions with the Laguna itself. 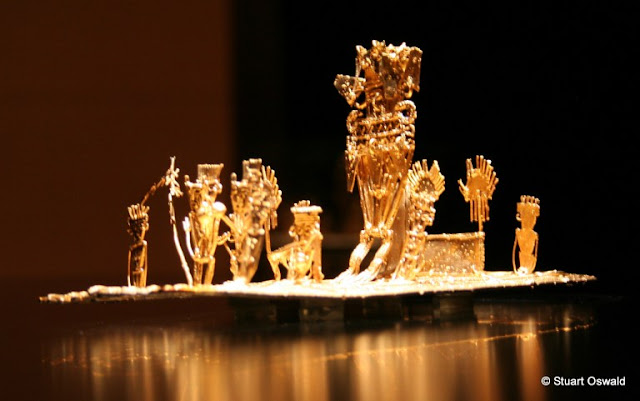 Summary of the Laguna from it's Wikipedia article.

Lake Guatavita (Spanish: Laguna de Guatavita or Lago Guatavita) is located in the Cordillera Oriental of the Colombian Andes in the municipality of Sesquilé, in the Almeidas Province, Cundinamarca department of Colombia, 35 miles (57 kilometres) northeast of Bogotá, the capital of Colombia.


The lake is circular and has a surface area of 19.8 hectares. The earlier theories of the crater's origin being a meteorite impact, volcanic cinder or limestone sinkhole are now discredited. The most likely explanation is that it resulted from the dissolution of underground salt deposits from an anticline, resulting in a kind of sinkhole.


There are hot springs nearby in the municipality of Sesquilé, which means "hot water".


While the existence of a sacred lake in the Eastern Ranges of the Andes, associated with Indian rituals involving gold, was known to the Spanish possibly as early as 1531, its location was only discovered in June 1537 by conquistador Gonzalo Jiménez de Quesada while on an expedition to the highlands of the Eastern Ranges of the Andes in search of gold. This brought the Spanish into the first contact with the Muisca inhabiting the Altiplano Cundiboyacense, including around Lake Guatavita.

Further snippet from the Wikipedia entry.

Lake Guatavita was reputedly one of the sacred lakes of the Muisca, and a ritual conducted there is widely thought to be the basis for the legend of El Dorado, "the golden one". The legend says the lake is where the Muisca celebrated a ritual in which the zipa (named "El Dorado" by the conquistadors) was covered in gold dust, then venturing out into the water on a ceremonial raft made of rushes, he dived into the waters, washing off the gold. Afterwards, trinkets, jewellery, and other precious offerings were thrown into the waters by worshipers. A few artefacts of gold and silver found at bottom hold proof to this claim; however, to date, attempts to drain the lake or salvage the gold (see Lake Guatavita gold) have yielded no more than these.

Once you reach this place you'll see a welcoming entrance and straightforward ticket booth COP$18.000 per person. Children go free. If you have a resident ID (if you live in Colombia) you'll get the entry for COP$11.000. There are decent facilities inside. Included tours operated every 10-15 minutes or when enough people have gathered. They are nearly always guides in Spanish only. If you don't speak English leave the group and set-off yourself. The walk is about 40mins and really nice. Try to avoid the groups that pass. There are information boards all along the way with an English translation. Note it is not accessible with a wheelchair or pram. There are some 250 steps involved. You'll pass the Devil's Breath plant that is quite notorious internationally and something that I have written about in the past. You'll pass "backwards" through an old Muisca hut recreation before entering the crevices to the Laguna's rim. After which you'll ascend steeply to the rim. There are snakes around this part of the path that adds the aura of the place. This climb can for some newly arrived visitors to Bogotá be hard. It is due to the altitude increase to what is already a high point in the landscape. Near the top, there is really some wonderful fauna exclusive to this altitude and climate in Colombia. The path takes you past two vantage points. The second being the best for photos. So just enjoy the view from the first point you see it instead of joining the hustle of everyone trying to take photos. Walk easy to the second and take your time here. After this, you'll walk a nice distance around a part of the Laguna's rim before making a decent along with a much less flattering path before exiting the site somewhere totally different and far from where you actually entered. See my Important Note near the end here on what to do next after the going through the site.

There is a number of ways to visit this amazing site. However none of which is really ideal. The greatest barrier is it's local, traffic, and the overarching costs involved. By Colombian standards, this is, however, a perfectly accessible place.

If you don't have a car, friends with a car, not willing to pay for taxis or an Uber your very best bet is to just take a tour. It's easy straightforward and everything is catered for. Tours on TripAdvisor are advertised from COP$228,000.00 upwards. Your Hostel or Hotel might have cheaper more convenient tours

There is no public transport right to the lake. The closest you can go is to the town of Gautavita. As answered here in a TripAdvisor Q&A you'd take the Transmilleno to "Terminal del Norte" (usual Cop$1700), from there take a bus to the town of Guatavita (about COP$8000 pesos). Ask around for the local (small) bus, you can find them inside the station or across the bridge from the Transmilleno station. Get off in the town centre of Guatavita and take a taxi service to the lake. The taxis can take up to 6 people sometimes. The single taxi fare from here is COP$50,000 pesos up you can wait until more people share it with you. Important, ask them to wait and pick you up at the Laguna's visitor exit which is another parking lot about 3 miles from the visitor entrance to the Laguna, and you can negotiate this return price. If you are travelling with others it is better to try and take a car. If you are travelling alone it is in nearly all cases better to take a tour. 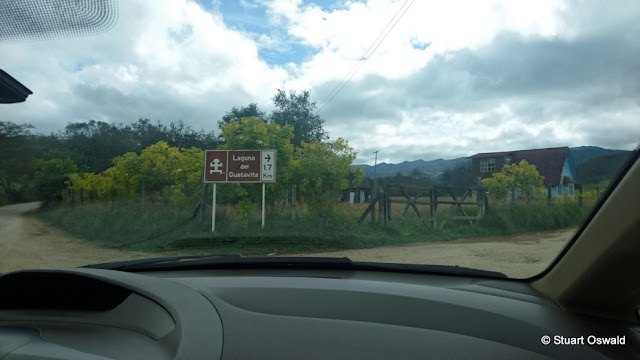 It's an easy enough drive straight the North of Bogotá. The trip can be made or broken depending on the traffic. Avoid rush hours by being early and any holiday exoduses. You'll go through two tolls, past some winding roads with beautiful almost European-esque scenery and a nice cool climate. There is a dirt road with some major potholes for the last 3 or so miles before the Laguna's visitor parking spot that's right near to the site's entrance too. Signage to the Laguna is good. Satellite navigation does a job of getting you there too. Keep going until you see the visitor entrance. The parking is just after it to the right. Getting back to Bogotá is fairly standard. Would only recommend that you perhaps try to get back again early before the evening traffic gridlocks the whole entrance through Bogotá's North. You could take the eastern entrance back into Bogotá's Avenida 170 or further down to Avenida 26. This route has way better scenery. You do still pass tolls though but traffics seems significantly lower this way.

Look at their fare estimate from Bogotá to Laguna de Guatavita, it looks pricey and it could be depending on your budget. But take a look a uberPOOL. If it is available at the time you want to make the journey then this is a fine way to make your way there. As you'll see from the photos in the post you will pass through two tolls Uber drivers will add this to your Uber bill after the journey. They sometimes like to add on a little tip of about COP$3.000 when they do this. The total tolls will amount to no more than COP$17.000. You could just as well pay this to the driver in cash. Be sure to get the toll receipts in case your driver tries to add them again on to your final Uber bill (as what has happened to me in the past with this driver. Thankfully Uber customer service resolved it all with a full refund.). You can signup with my code and get COP$15.000 off of your first ride. Having said all this, this is fine in getting you to the Laguna. What about getting back into Bogotá. Well, you might be able to agree on a price with your Uber driver to wait and take you back. Walk it to the nearest town that has a bus to Bogotá's first transmilleno stop. Ask any of the other visitors if they have space to give you a lift.

It's very important to note, whichever method you choose on visiting this Laguna, is that the visitor entrance and exit are a considerable distance apart. A 45-minute walk over 2 miles on country roads with low to light traffic. There's a minibus service which runs every 20 minutes or so. The cost for this is COP$2000. I walked it and it was a fairly pleasant walk until I reached the crossroads and had to walk up a fairly busy dirt road with a fair amount of traffic. 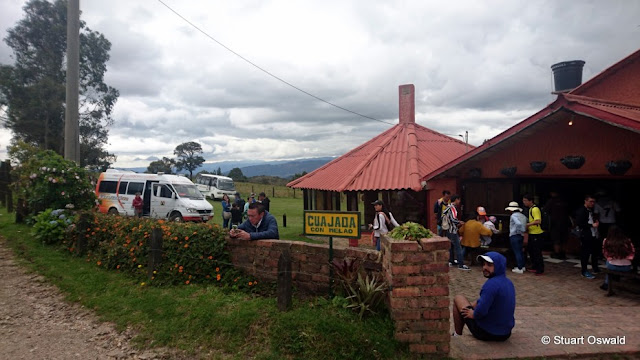 The Town of Sesquilé and Guatavita Near Laguna de Guatavita

Sesquilé is the nearest and for me the nicest. It has a beautiful town square with a host of bakeries and small shops. It has a great colonial feel with the original church of the time of the town's founding as well as a much larger newer one. It is not unheard of for visitors to take the long 3 hour walk from this town to the Laguna de Guatavita. You'll pass a number of guesthouses on the way. 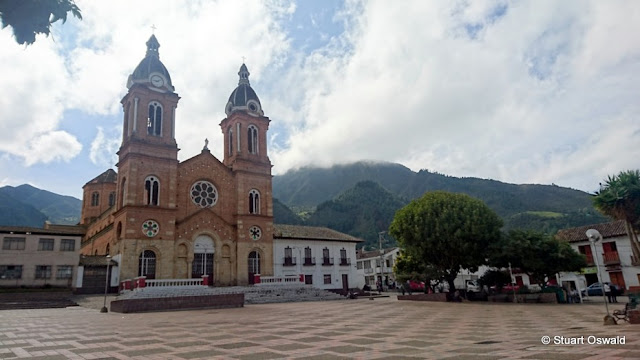 Guatavita is a much larger town than Sesquilé and the name is far more historic stemming from one of the original people called the Muisca. It's relevance in history and through to today is linked with the Laguna. The town was moved around the 1970s due the man-made lake nearby which provides water to Bogotá to where it stands today. The town has a really nice Anden feel to it. It is, however, all a new build. It does still remind me of the old cartoon called The Mysterious Cities Of Gold which itself themed heavily on the Eldorado legend of the area. There are a few hotels here and the town would be a good base to explore the area. Getting to the Laguna from here I would say is not realistic by foot. But us mentioned above there is a taxi service to the Laguna and by car it is a relatively short journey. I went to an OK restaurant called Comida Tipicas, I'd say you should give another a go. I am sure you will find something smaller with better food on your visit. The town is really very accommodating. 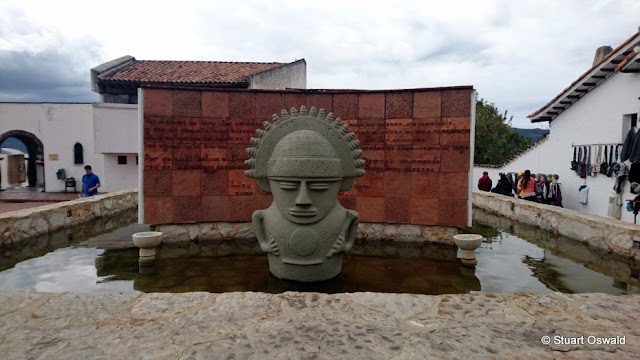