Visiting the Base Naval ARC Bolivar of Colombia

Captain in command of this serving #Colombian #submarine. Was a pleasure to board the #ARCTayrona here at the off limits #BaseNavalARCBolivar in #Cartagena, #Colombia. See my website for a report of the visit.
A post shared by Stuart Oswald (@stuartoswald) on Jan 16, 2017 at 11:34am PST


My exclusive visit to Colombia's Naval Base called locally as the "Base Naval ARC Bolivar" was a very special occasion for myself. Particularly as I am a huge fan of British naval history it was interesting to compare Britain's sea-might to that of another great country. With links with Britain such as Spain being our common enemy and at other links to British pirates and Buccaneers. Before you ask this visit is not available to the public and I was lucky to have met someone who invited me to the base for a personal tour. It was a huge privilege to witness and be present on a functional active base. I am glad to have taken the following photos and to be able to describe some of which I have seen. Please enjoy. I welcome all comments particularly from anyone with an interest in naval history.

The base itself has the necessary guards and gates as any base would. At the entrance, I was warned not to take photos even for the public road outside. Hence the absence of such a photo here, never the less StreetView offers us assistance. Once passing heavy security that consisted of metal detectors and pat-downs by armed guards. The base is a little village and reminds me straight away from the bases depicted in the various Vietnam films and namely that of Good Morning Vietnam. Sailors and other such servicemen travel the base largely on foot but I did see some vehicles. We walked to the waterside where a vast number of vessels were docked. 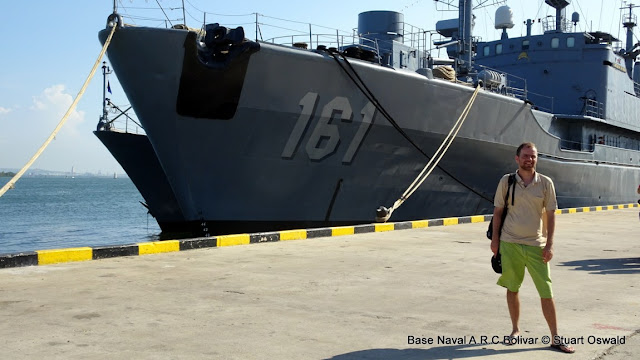 The first ship that caught my eye was the largest of them all, ARC Cartagena de Indias (BM-161). The ARM stands for Armada Nacional de la República de Colombia. Little did I know that it actually comes from one of my own countries, Germany. The ship was constructed in 1968 for the German Navy and retired in 1991. She was waiting to be scrapped until 1996 when she had been acquired by the Colombian Navy for 2 million dollars and were conditioned for re-service. Here she was, docked in the very port for which is a flagship for, Cartagena. After meeting with her crew port-side I discovered that she functioned as a  hospital ship back in 2010 in the Colombian humanitarian mission to serve the population as a result of the Haiti Earthquake.

It was wonderful to meet an old friend. The ARC Gloria is a spectacular piece of seafaring craftsmanship. One that I visited in September of last year when it left this home port of Cartagena to visit London Docklands in September 2015. 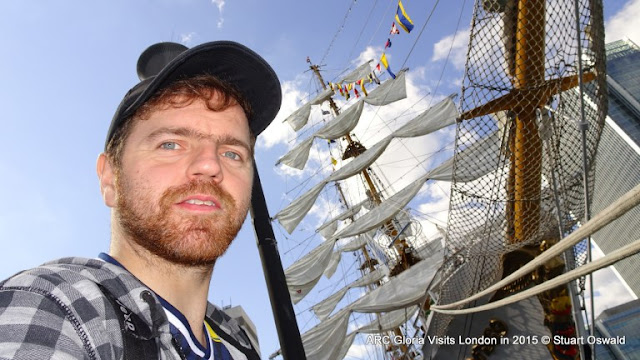 The Gloria herself was authorised in January of 1966 according to the decree nº 111, that the National Navy acquire a sailboat type brigantine, of Three masts, to be used as a school vessel. The purchase was postponed until the Minister of Defense and General Gabriel Rebeiz Pizarro, in a meeting, gave his support to the project by some writing on a napkin. The formal contract was signed on October 6, 1966, with Astilleros Bilbainos Celaya SA, after which work began in April 1967. On December 2 of the same year, the ship was launched in the Ria del Nervión, the ship was baptised as Gloria. In August 1968, a group of seafarers was assigned, consisting of officers, non-commissioned officers, cadets and civilian personnel to move to Bilbao, in order to participate in the last stage of construction and reception of the sailing vessel. On October 9th, 1968, she sailed for the first time from the port of Ferrol (La Coruña), on her way to the Colombian port of Cartagena de Indias, where she arrived on November 11, 1968.

After boarding the ARC Gloria it was like meeting an old friend. Totally spotless and in superb condition the decks were squeaky the brass was gleaming. I headed with my host to the function space to the rear of the ship. Progressing on to the bridge and area normally off limits, I got my hands on the helm with beautiful views over her home port (360 views). Later I got a look at the crew areas deep within the ship and totally immaculate. Passing the ship's binnacle which had a display of all the ship's voyages. Some noticeably passing the British Isles. I can to a massive mess where I sat with some of the crew and they explained their day to day tasks. Many of which with have had me knackered after just one. The best thing apart from mixing with the crew is that the belly of the ship is blissfully air-conditioned. ARC Gloria is a schooling ship and focusing on classical navigation. Using the stars and other various instruments they will become the finest in South America. 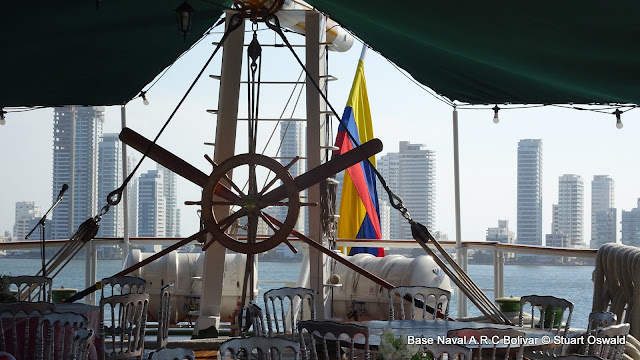 Boarding this vessel I was welcomed with a full military salute, a privilege, and an honour. There was tight security from the offset. The ARC Caldas was a bustle with its crew making all manner of preparations to set sail this very evening. I tried my best to stay out of their way as I wound my way, accompanied by my own guard, through the bowels of the ship. Even the kitchen chef was busy organising his kitchen. The chief engineer took great pride in showing off the Caldas' engine and control room both of which were very noisy and we weren't even in motion. Progressing up to the ship's bridge it felt as if I was climbing all the stairs of HMS Belfast in London. I guess this is an aspect to all naval ships. Making it to the bridge I see plenty of screens and instruments working, even a number of radar screens are displaying outputs. I am asked if I would appreciate a looking in at the ship's command room. This is where the theatre of war is orchestrated. I am standing amid two rows of a dozen control points. Tired I sit down in the chair amid all this technology. The staff takes a gasp. I am told that that is where the commander sits and none of the crew ever take it upon themselves to sit in the chair out of respect for the responsibility that it commands. I immediately get back on my feet to them joking that it's fine for a visitor such as myself to enjoy the moment. Which I did with the thoughts of me in command keeping me busy momentarily. I then make my way back down to the front of the vessel to inspect the forward gun. Big difference from the guns on display in Portsmouth, but this is modern warfare now and such heavy guns are no longer the mainstay of naval combat. Progressing the control tower I passed some C-Star missile launchers. Then onto the ship's helipad. This is a great article explaining the ships build, weapons systems and other technicalities of this German-built vessel. I said goodbye to ARC Caldas among a beautiful sun set. 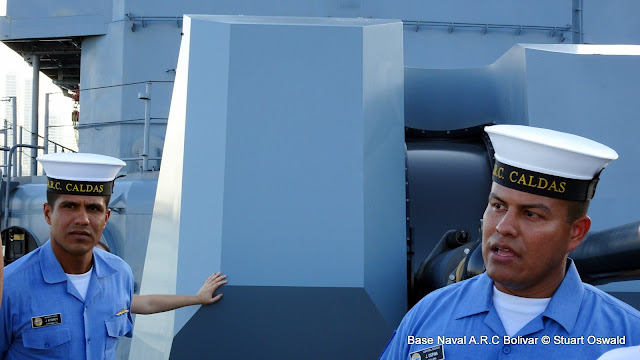 The last vessel I was privy to on my visit to the Naval base was the ARC Tayrona. It is a German-built submarine and one of two of the same Type 209/1200 class. The other submarine being the ARC Pijao. Tayrona was commissioned on the 18th of July 1975. It is the second submarine that I boarded after HMS Alliance. However, Tayrona is the only active one of the two.The Tayrona accommodates just over 40 active servicemen and with sleeping space extremely limited sleeping shifts. The bunk beds used are removed when torpedoes are required to be loaded into their firing shafts. There's a small captain's lodge, desk, kitchen and the table for no more than five squeezed crewmen to sit around. Then there's the periscope right by a row of control systems. Before backing onto a comparable enormous space for the engine and it's associated machinery. The most striking aspect is the very strong smell of oil and diesel. Photography was again strictly forbidden. However, I did manage to have the periscope photos taken, but only after much persuasion and only with the captain himself taking the photo so as not to include certain instruments. So you can view them as exclusives. Among the memorable moment of actually using the periscope, I was allowed to climb the shaft to the vessel's fin. I so wish I could have taken more photos but I respect how sensitive such imagery is on an active vessel such as this submarine. 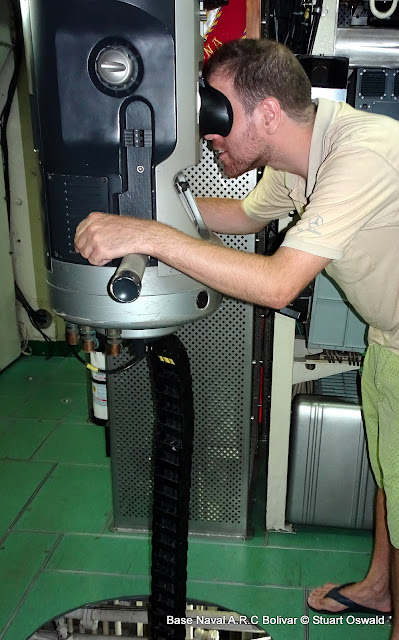 Views from the Base

Beautiful afternoon views out around this historic port. Cargo traffic. Tourists cruse-liners and working port. This is a revealing 360 image of the entire port that features the Base Naval ARC Bolivar. As I mentioned the base itself is off limits to the public but to gain great views or the port it's free from almost any position around it. From some angles, you can actually view into the base itself and the ships docked therein. 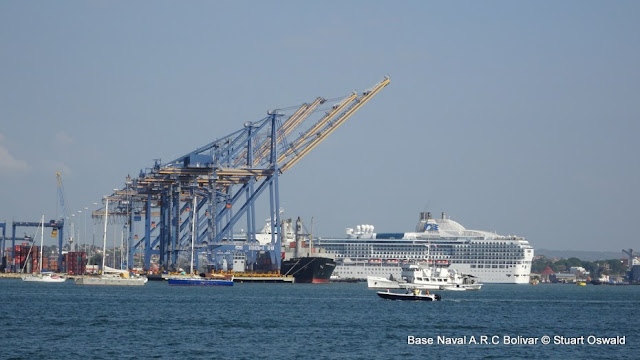