The Colombian Cemetery on Halloween

Location: Colombia
Well, Halloween weekend has passed and the day itself has arrived. From a sleepy Andean town west of Bogotá, I decided to visit one of those places we do not like to think about let alone grace with our presence, a Colombian Cemetery.

Away from the typical Halloween celebrations of costumes and fancy dress that Colombians like to indulge in just as much as their North American counterparts. See my snap video of some fairly outlandish Colombians pretending to be the Muslim Mujahideen. 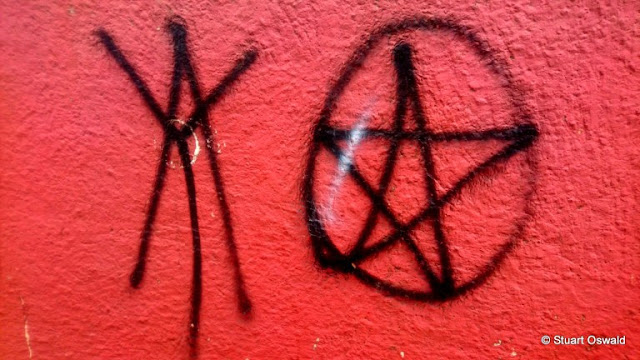 Colombian cemeteries are pretty spooky places with a very erie backdrop. If you visit on a not so sunny day the feeling is straight up spooky. Colombian cemeteries from conflict areas have a particularly poignant feeling of death as graves are unmarked, tombs (holes in the wall) are stuffed with bags holding the remains of those who've fallen foul of one group or another. Many graves fall into disrepair and are reclaimed by nature. Spurred on my magical realism and folklore as well as the deeply mystical traditions of many Colombians the dead hole a particular aspect of society here in Colombia. Most people are aware of the purpose of this time of Year unlike many in the developed west, as a day to remember the passed relatives and saints of the Christian faith. There are many needed visits being made to the family tombs and with fresh flowers placed at graves.

There are however others who delve deeper into the more sinister side of the occult world and practice satanic rituals that are also part of Colombia's spiritual makeup and stem from African rituals. Gravesites are the scene of some weird scenes on Halloween night and watchmen are needing to be on duty round the clock across the country.

I decided to spend an evening in such a Colombian Cemetery as night closed in. Just wondering around and taking in the scenes. You can view what I filmed here below.

Sometimes pictures tell a more pungent story than a mere video. I feel that the following depict a more accurate feel for this place and it's somberness and also to the odd glimpse of hope that can be found in such places, particularly here in this cemetery in the deepest part of Colombian.

From the faithful friend by his owner's side, the menacing vultures, rows of tombs, freshly dug graves to baby Jesus. Cemeteries are places worthy of much consideration. Remembering the dead. #Halloween or Hallowe'en (a contraction of All Hallows' Evening), also known as #Allhalloween, All #Hallows' Eve, or All #Saints' Eve, is a celebration observed in a number of countries on 31 October, the eve of the #WesternChristian feast of All Hallows' Day. It begins the three-day observance of #Allhallowtide, the time in the #liturgicalyear dedicated to remembering the #dead, including #saints (hallows), #martyrs, and all the #faithful departed. #Amen
A post shared by Stuart Oswald (@stuartoswald) on Oct 28, 2017 at 4:22pm PDT